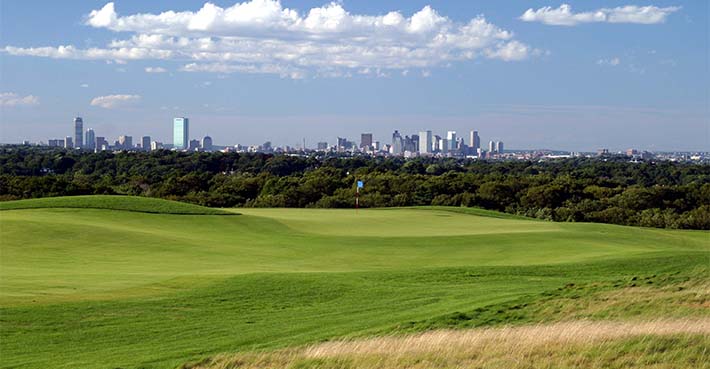 Creative Resources Group is no stranger to the golf course, but, strangely enough, we rarely get the opportunity to play. Instead, our production crew is usually flying around on a golf cart, camera in hand, shooting the game as part of a corporate event or outing.

However, for the Institute of Real Estate Management (IREM) Annual Charity Golf Tournament, CRG elevated production to a whole new level – and it was all inspired by the incredible event location, Granite Links Golf Club in Quincy, MA.

Situated 300 feet above sea level, atop what were once actively mined quarries; Granite Links is a world-class golf course with breathtaking views of Boston, the Harbor Islands, and the Blue Hills.

After scouting the location prior to the event, CRG immediately added long time friend and jib operator Wally Argo to the crew. His 30’ expandable jib would perfectly capture the beautiful vistas, as well as sweeping shots of players at the first tee and surrounding areas. A second camera on GlideCam, operated by CRG Director of Photography Caleb Rasak, would travel around the course, capturing soundbites and closeups from a variety of players. Then, at the end of the day, the video would be edited on location and premiered just a few hours later at IREM’s cocktail hour/dinner party.

The day of the event arrived quickly. With a plan in place and our CRG Crew shirts cleaned and pressed, the production team was ready to roll… Just one problem. After a jam-packed month of various on-location shoots, CRG’s GlideCam wasn’t calibrated for today’s unique camera/audio setup! Luckily, Creative Resources Group knows a few folks over at GlideCam Industries.

The two companies both started in the early 1990’s and grew up almost alongside one another, CRG in Plymouth and GlideCam just a few miles north in Kingston, MA. For CRG, our GlideCam camera stabilization system has been an important asset over the years, providing the smooth-moving camera shots we need in a variety of environments, for clients both large and small.

Needless to say, when Caleb knocked on GlideCam’s door first thing in the morning, just hours before the IREM shoot, Dave and Tom were eager to accommodate. They worked with Caleb quickly and calibrated for CRG’s camera/audio setup, also providing us with some much-needed GlideCam maintenance after a long summer of shooting. Caleb was in and out and arrived at Granite Links on time. A big Thank You to Dave, Tom, and everyone at GlideCam from the entire CRG team! The footage just wouldn’t have been the same without your help.

The rest of the shoot went flawlessly. Wally’s jib impressed many of IREM’s event participants, who asked, “When is this going to be on ESPN?” Meanwhile, Caleb and CRG Creative Director Charlie Rasak made quite a few friends over at the Bahama Mama hole… The players really had fun interacting with the crew, and CRG enjoyed every minute of it – we were getting some great footage and soundbites!

The Tournament began at 1:30pm, and by 4pm, all the footage was in the hands of CRG Editor/Associate Producer Jessica Banis, who had setup a small, portable edit suite in a ballroom right next door to where the evening’s dinner party would be. By 7:00pm, the Thank You video was complete, combining pre-produced graphic elements and music with soundbites and b-roll footage captured just a few hours prior.

By 5:30pm, as the first of the attendees came off the golf course, the interview booth was ready to roll. And even though only a few folks managed to break away from the cocktails, auction, and other event goings-on for an interview, those who did really enjoyed themselves. Jessica was a fabulous hostess. Those videos are now available on CRG’s YouTube (www.youtube.com/VideosByCRG) for participants to embed and share.

Around 7pm, Creative Resources Group premiered the Thank You video during dinner, just as planned, and ran it on a loop for attendees to enjoy throughout the remainder of the event. The video also played on a loop on a monitor outside the event room, attracting attendees who caught themselves and their friends on the big screen on their way to dinner.

Many attendees were amazed at the video’s lightning fast turn around time and super high quality. The jib perfectly captured the amazing views of the city and course in stunning color. Soundbites captured on the GlideCam were light-hearted and fun, a perfect match to the event’s casual mood. IREM and CRG received many kudos throughout the night.

CRG would like to thank Dave Barrett and Kelly Hannon from IREM Boston for all their hard work in planning and coordinating such a fantastic event. Both were instrumental in providing CRG with all the information and resources we needed prior to and at the event.
Creative Resources Group is very much looking forward to shooting IREM’s next event – the annual Lifetime Achievement Awards Night, this year held at the JFK Museum in Hyannis, MA. This event will honor Randi G. Lathrop, Director of Business Development at the Boston Redevelopment Authority, with a Life Time Achievement Award, and Senator Brian Joyce with Legislator of the Year.

Of course, CRG is also looking forward to the 2015 IREM Annual Golf Tournament. Who knows, maybe we’ll actually play a little golf ourselves next time!

Background: The Institute of Real Estate Management (IREM) is an international community of real estate managers dedicated to ethical business practices, maximizing the value of investment real estate, and promoting superior management through education and information sharing. IREM Boston Metropolitan Chapter No. 4 is just one of many. IREM membership includes more than 18,000 individuals and 550 corporate members. (From www.iremboston.org.)
IREM Boston’s Annual Charity Golf Tournament, held at Granite Links Golf Club in Quincy, MA, raises money in support of the Ellie Fund, Intestinal Fortitude Crohn’s, Gloria Gemma Breast Cancer Foundation, and South Shore Mental Health. Participants begin the afternoon with a game of world-class golf or tennis, and then join IREM for dinner, where prizes and raffles are awarded.