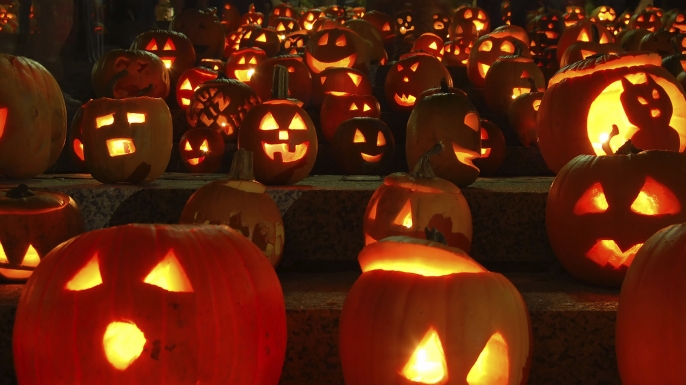 It’s been said that Halloween has increased in popularity so much that it falls second to only Christmas in terms of total consumer retail spending. Sounds about right, what with all the expensive, fancy costumes for adults and children, decorations, theme-parks, haunted activities, Halloween parties, and pets.

Being a Halloween-junkie myself, I totally believed it. Halloween is at #2 in total retail spending. Christmas (or Winter Holidays) is, and forever will be at #1. Common knowledge, right? But just as I was about to type the statistic onto the Creative Resources Group Facebook page status bar, I stopped. Wouldn’t it be cool to post an actual retail sales total for both holidays with this status?

I eagerly jumped onto Google search and looked for comparison stats.

Nothing. I found many an article tooting the same tune, “Halloween is now the 2nd largest holiday…” But no actual hard numbers, no sources, no facts.

Then, Snopes.com popped up in my search results. Ok, here at least maybe I could find a shred of legitimacy and a source or two.

What?! I just finished reading a slew of articles stating the exact opposite. This can’t be right. I noted the date on the Snopes.com article, 2006. Alright. Dated article. So between 2006 and 2013 Halloween must have risen up the ranks and is now #2. At the bottom of the Snopes.com article, I found a source, (ah-ha) the National Retail Federation at www.nrf.com.

Now this is an interesting site. If you ever have a moment to check it out, there’s a ton of research and resources – what consumers are spending, when they’re spending, how they feel about spending, and plenty of economic outlooks.

I found data on Halloween – an entire page devoted to Halloween 2013 with stats, news, historical data, and blogs. (Top adult costumes this year by the way: #1 Witch, #2 Batman, #3 Vampire.) I found out that the total projected 2013 Halloween spending is estimated at $6.9 billion. But how does that compare with the other major holidays?

To find out, I emailed the author of the Halloween stats page. She was kind enough to point me to www.nrf.com/consumertrends, a site with total retail spend for top holidays nicely graphed out: 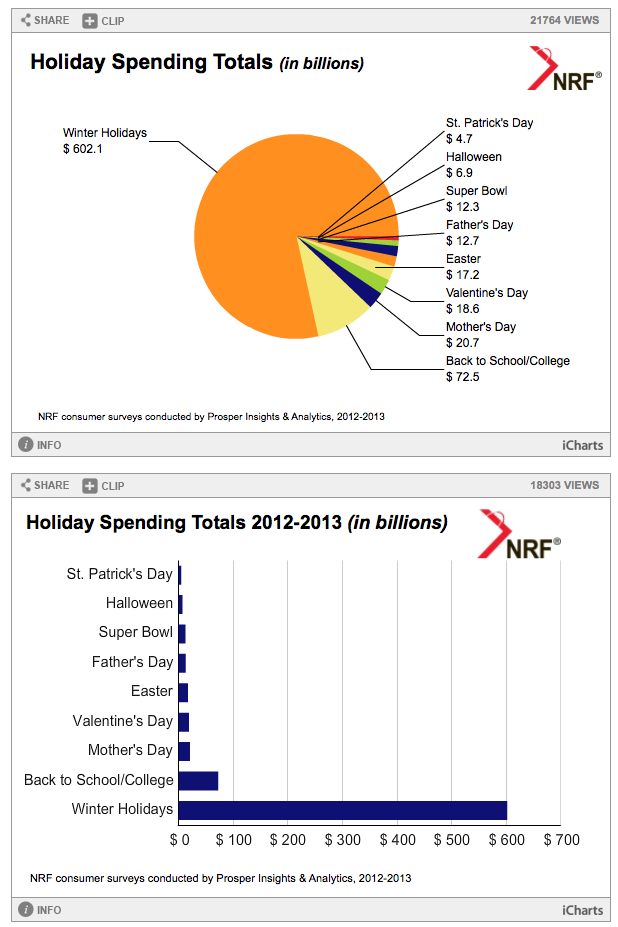 Winter Holidays Take Up a Whopping 76% of Total Retail Spend. Halloween is Barely on the Chart

Wow. Just Wow. First thing’s first, Winter Holidays. Nothing compares to winter holidays, which take up an overwhelming chunk of the pie chart. Over 75% of the retail purchase pie is spent during Winter (Christmas) Holidays. Halloween doesn’t even come close to 2nd. We actually spend more on the Super Bowl then we do on Halloween, which is really surprising. The second place prize goes to an event that’s not even a holiday: Back to School. Then you have Mother’s Day, Valentine’s Day, Easter, and Father’s Day rounding out the list.

And Halloween’s low place on the totem pole? Well, it’s most likely due to the lack of expensive gift giving, candy and costumes aside. And while the NRF research shows that only a slightly higher number of people throw or attend a Super Bowl party (41.8%) vs. a Halloween party (30.9%), football fanatics are likely to purchase new and expensive TV for their event. That explains it.

Halloween, 2nd in retail spending only to Christmas? Myth Busted. So the next time you read an article on Halloween’s huge increase in popularity, tell the author to check his/her facts. As much as we love to dress up and decorate, we’ve got to spend at least $66 billion more to oust the current #2 retail holiday – Back to School.