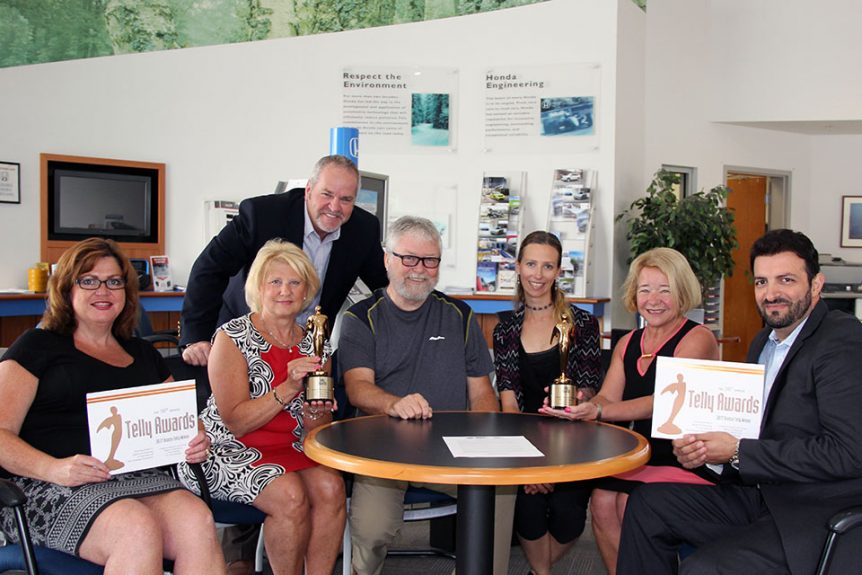 Peters of Nashua/Creative Resources Group has been named a winner in the 38th Annual Telly Awards for the commercials, “I Pick Peters” and “Lease Return HQ.” With over 13,000 entries from all 50 states and numerous other countries, this is truly an honor.

First aired in July of 2016, the two commercials were designed to cut through the noise of traditional automotive ads with a combination of fresh, modern graphics and unique, often unexpected, copy points. Advertising agency Creative Resources Group was inspired to create the ads as part of a new overall marketing strategy for Peters of Nashua, a blended approach including traditional and digital. The look and feel of “I Pick Peters,” “Lease Return HQ,” and others engaged viewers and drove them online where they were presented with coordinating elements and offers.

“We are very excited to share this award with Peters,” says Charlie Rasak, CRG President and Creative Director. “Dealership ads all tend to be very similar, they follow a formula. To deviate from that can certainly be intimidating, but Peters saw it as a great opportunity. We haven’t look back since.”

Peters of Nashua was similarly pleased. “We’re proud of the entire campaign,” says owner, Peggy Proko Weisman. “To the viewer, the ads are fun; they’re colorful, they’re quirky. But a lot of thinking went into the strategy. Every element was carefully planned to drive sales. So to receive not one, but two awards… It’s quite an honor.”

Creative Resources Group is one of New England’s leading advertising agencies, providing integrated marketing programs to clients both local and international since 1991. They offer in-house video production, digital marketing and website development, graphic design, and media purchase and placement. CRG’s automotive division, CRG Auto, takes pride in planning, creating, and managing all aspects of advertising and marketing for clients both local and regional.