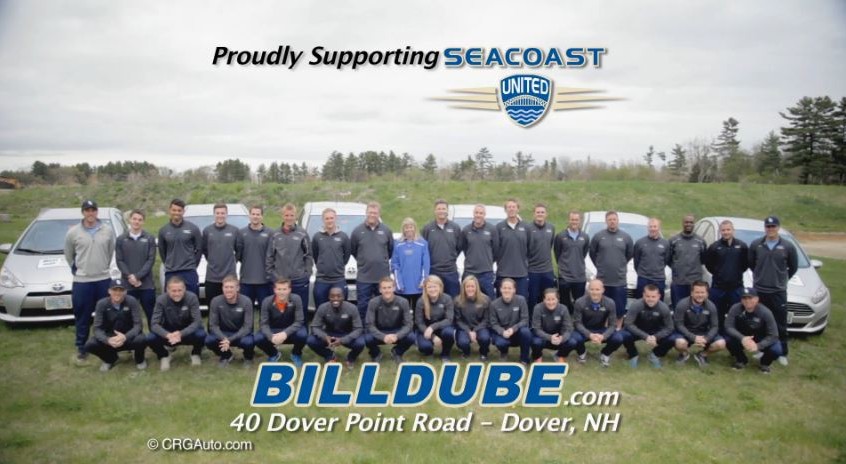 Of course, New England is famous for its love of sports and their teams – with championship titles for the New England Patriots, Boston Red Sox, and Boston Bruins. So, it seemed a natural for CRG Auto to connect Bill Dube Ford Toyota to local fans with sports advertising.  For each team and season, CRG Auto created a corresponding themed television campaign, including Red Sox baseball, Celtics basketball, Bruins Hockey, and Patriots football.

He was right. That is, until now! In helping to promote Bill Dube Ford Toyota’s Drive 4UR Community fundraising event for Seacoast United, CRG Auto went on location, shooting the Seacoast United coaches in and around the dealership.

“We had a ton of fun,” says Director of Photography Caleb Rasak. “We interviewed everyone, we shot all the Seacoast vehicles, and we let the coaches show off their skills for the camera. It was great.”

The coaches even got to deliver Bill Dube’s signature tagline in a large group shot. “You’ll always do better at Bill Dube! Always!”

Back at CRG HQ, the post production department edited the footage into a 60 second and 30 second web video to promote the exciting fundraising event, scheduled for Saturday June 21st at Bill Dube Ford. For each person who test drives a Ford vehicle during the event, Ford will donate $20 to Seacoast United Sports Foundation, up to $6,000.  “It is our goal to raise the maximum of $6,000 for Seacoast United,” says Reed. “And all proceeds will help fund Seacoast United’s local community sports programs.”

Additionally, the event is jam-packed with sports-themed fun and activities for the entire family – a free barbeque, soccer ball shaped bouncy house, autographs from the New Hampshire Phantoms soccer team, contests, and more. Kids will even have the opportunity to test their soccer kicking skills with speed gun measurements.

The Drive 4UR Community event is a great opportunity for Bill Dube as well as Seacoast United, an organization of over 50 sports teams and over 5,000 members. Creative Resources Group encourages clients to get involved with their local community and support organizations with whom they share a personal interest or a passion.

In addition to producing the two web videos, CRG sent out a video and traditional press release to local television stations, asking them to lend their support and perhaps even attend or cover the event.