When long-time client Debbie Reed of Bill Dube Ford Toyota asked CRG to help her promote a holiday charity event, the entire team jumped right on board. Reed had already partnered with Linda and Joey Hagan, of Jewelry Creations in Dover NH, to create the Live, Love, Give event, a fantastic fantasy gift package including diamond jewelry, a $10,000 donation to charity, and a brand new 2014 Ford Mustang convertible.

To help promote the event, Bill Dube Ford Toyota asked Creative Resources Group to create an ad and an article for Jewelry Creation’s magazine, “LX Seacoast NH.” After a quick interview with Reed, CRG Editor/Associate Producer Jessica Banis set to work on the two page magazine article, a history of Bill Dube Ford Toyota’s family values and their commitment to the local community of Dover, New Hampshire. Meanwhile, Art Director Dennis Huston designed the full page magazine ad in a clean and modern style, featuring the beautiful Ford Mustang convertible in deep blue. Once Banis finished writing the article, Huston made it “print-ready,” in a design incorporating a large photo of the entire Reed family. 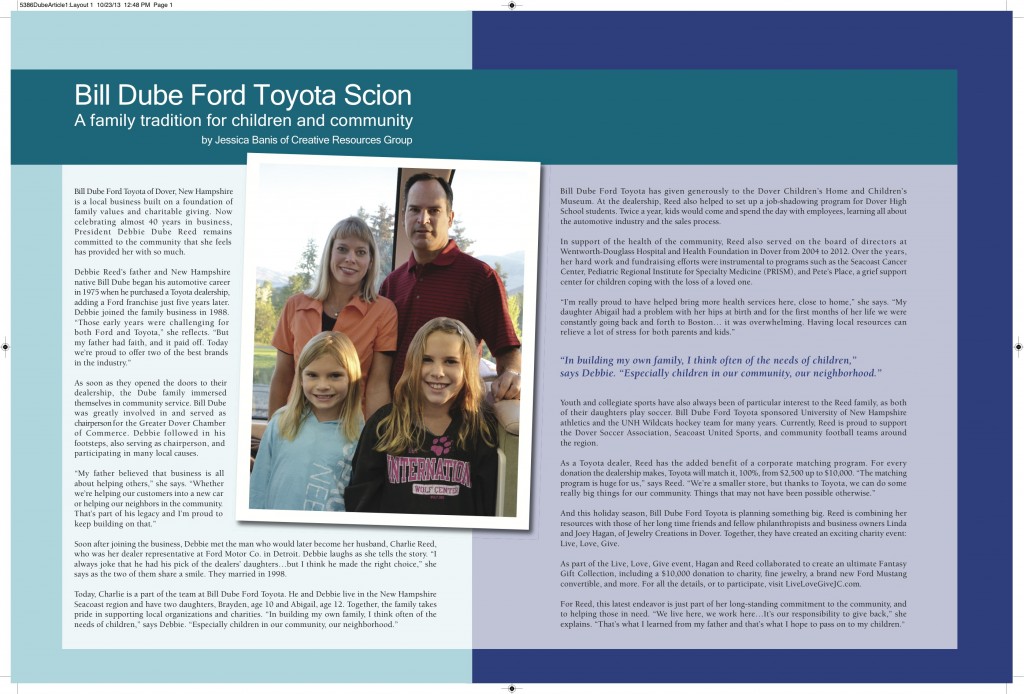 After the print work was completed, CRG Creative Director Charlie Rasak even connected Reed and Hagan to our friends at Center Stage Dance Academy for event entertainment – a flash mob of over 20 professional dancers.

And just today, the finished LX Seacoast NH magazines were delivered, including one here at CRG HQ, Plymouth MA.

The finished article and ad are just two examples of how CRG can help our clients with grassroots, community marketing. The holiday season is a great time to get involved in your local community, with an event, with a charity, or just with a little volunteer time. It may not drive sales today, but continued work in your city or town can strengthen your brand, expand your social media reach, endear you to your customers and potential customers, and connect you to other local business owners. Besides all that, helping others in your community just feels good!

A family tradition for children and community

Bill Dube Ford Toyota of Dover, New Hampshire is a local business built on a foundation of family values and charitable giving. Now celebrating almost 40 years in business, President Debbie Dube Reed remains committed to the community that she feels has provided her with so much. 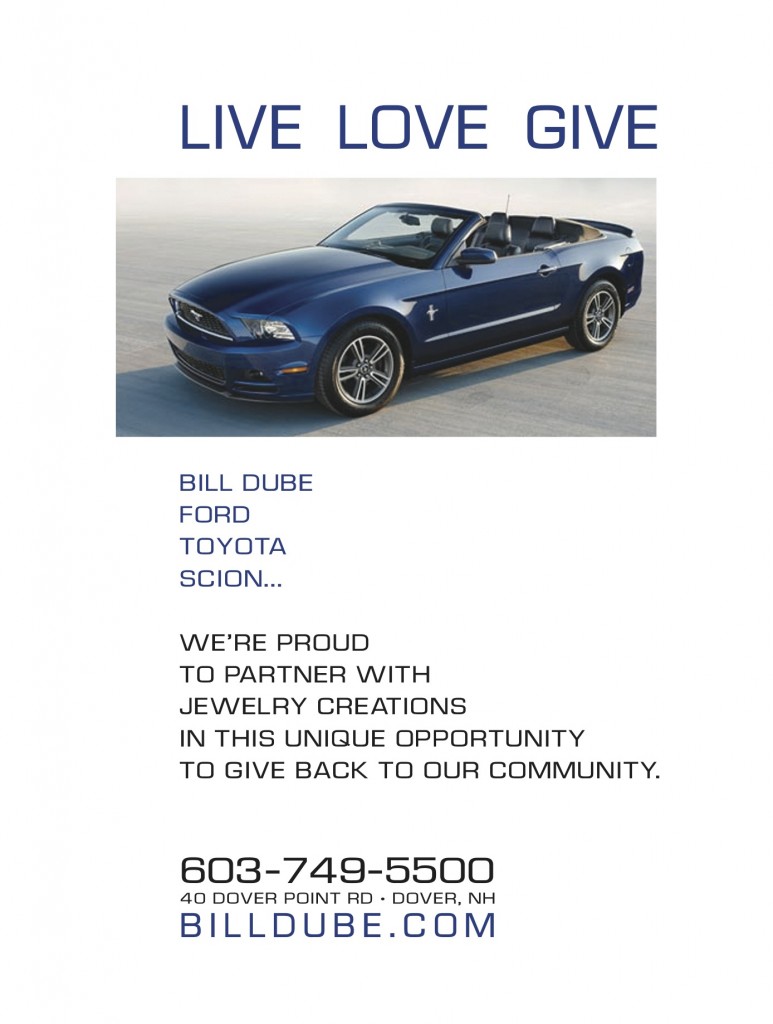 Debbie Reed’s father and New Hampshire native Bill Dube began his automotive career in 1975 when he purchased a Toyota dealership, adding a Ford franchise just five years later. Debbie joined the family business in 1988. “Those early years were challenging for both Ford and Toyota,” she reflects. “But my father had faith, and it paid off. Today we’re proud to offer two of the best brands in the industry.”

As soon as they opened the doors to their dealership, the Dube family immersed themselves in community service. Bill Dube was greatly involved in and served as chairperson for the Greater Dover Chamber of Commerce. Debbie followed in his footsteps, also serving as chairperson, and participating in many local causes.

“My father believed that business is all about helping others,” she says. “Whether we’re helping our customers into a new car or helping our neighbors in the community. That’s part of his legacy and I’m proud to keep building on that.”

Soon after joining the business, Debbie met the man who would later become her husband, Charlie Reed, who was her dealer representative at Ford Motor Co. in Detroit. Debbie laughs as she tells the story. “I always joke that he had his pick of the dealers’ daughters…but I think he made the right choice,” she says as the two of them share a smile. They married in 1998.

Today, Charlie is a part of the team at Bill Dube Ford Toyota. He and Debbie live in the New Hampshire Seacoast region and have two daughters, Brayden, age 10 and Abigail, age 12. Together, the family takes pride in supporting local organizations and charities. “In building my own family, I think often of the needs of children,” says Debbie. “Especially children in our community, our neighborhood.”

Bill Dube Ford Toyota has given generously to the Dover Children’s Home and Children’s Museum. At the dealership, Reed also helped to set up a job-shadowing program for Dover High School students. Twice a year, kids would come and spend the day with employees, learning all about the automotive industry and the sales process.

In support of the health of the community, Reed also served on the board of directors at Wentworth-Douglass Hospital and Health Foundation in Dover from 2004 to 2012. Over the years, her hard work and fundraising efforts were instrumental to programs such as the Seacoast Cancer Center, Pediatric Regional Institute for Specialty Medicine (PRISM), and Pete’s Place, a grief support center for children coping with the loss of a loved one.

“I’m really proud to have helped bring more health services here, close to home,” she says. “My daughter Abigail had a problem with her hips at birth and for the first months of her life we were constantly going back and forth to Boston… it was overwhelming. Having local resources can relieve a lot of stress for both parents and kids.”

Youth and collegiate sports have also always been of particular interest to the Reed family, as both of their daughters play soccer. Bill Dube Ford Toyota sponsored University of New Hampshire athletics and the UNH Wildcats hockey team for many years. Currently, Reed is proud to support the Dover Soccer Association, Seacoast United Sports, and community football teams around the region.

As a Toyota dealer, Reed has the added benefit of a corporate matching program. For every donation the dealership makes, Toyota will match it, 100%, from $2,500 up to $10,000. “The matching program is huge for us,” says Reed. “We’re a smaller store, but thanks to Toyota, we can do some really big things for our community. Things that may not have been possible otherwise.”

and this holiday season, Bill Dube Ford Toyota is planning something big.

Reed is combining her resources with those of her long time friends and fellow philanthropists and business owners Linda and Joey Hagan, of Jewelry Creations in Dover. Together, they have created an exciting charity event: Live, Love, Give.

As part of the Live, Love, Give event, Hagan and Reed collaborated to create an ultimate Fantasy Gift Collection, including a $10,000 donation to charity, fine jewelry, a brand new Ford Mustang convertible, and more. For all the details, or to participate, visit LiveLoveGiveJC.com.

For Reed, this latest endeavor is just part of her long-standing commitment to the community, and to helping those in need. “We live here, we work here…It’s our responsibility to give back,” she explains. “That’s what I learned from my father and that’s what I hope to pass on to my children.”